The Pier Park Project is a  is a collaborative luminasonic project by the visual artist GIIIVENS and composer Eli Kahn.
The artists have created a one-of-a-kind experience at Pier Park (located in Downtown South Bend, IN) in which infinite light will meet the likes of a quadraphonic soundscape of music and natural sounds. GIIIVENS' piece "Aether's Requiem" provides the spectator with a visual encounter with self and the light which lies beyond.  While Eli Kahn's soundscape "Portal to a Better Dimension" encompasses the listener through a quadraphonic speaker system mixed in  immersive surround sound.

Together, the visual & sonic elements combine to give spectators a unique experience. 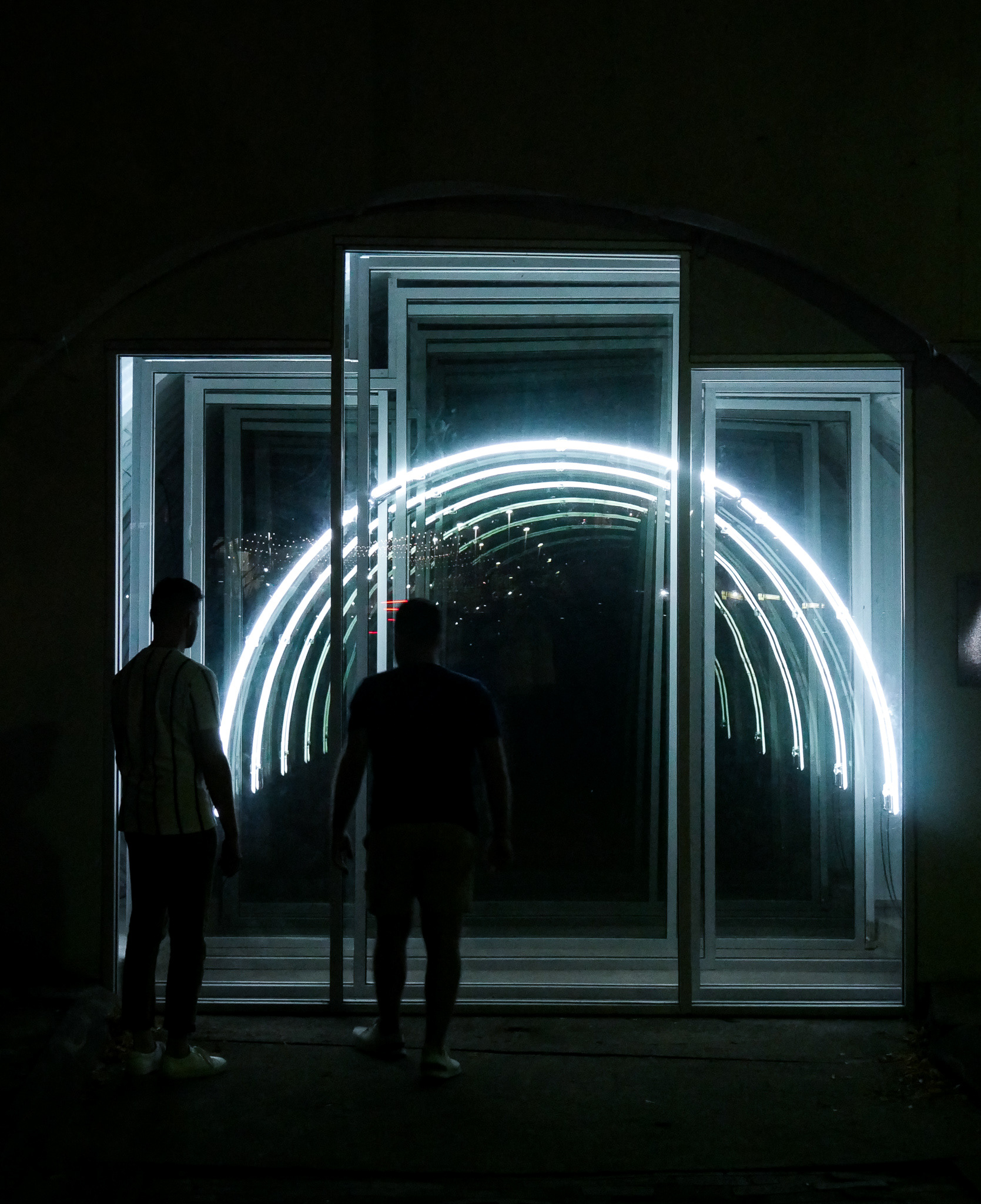 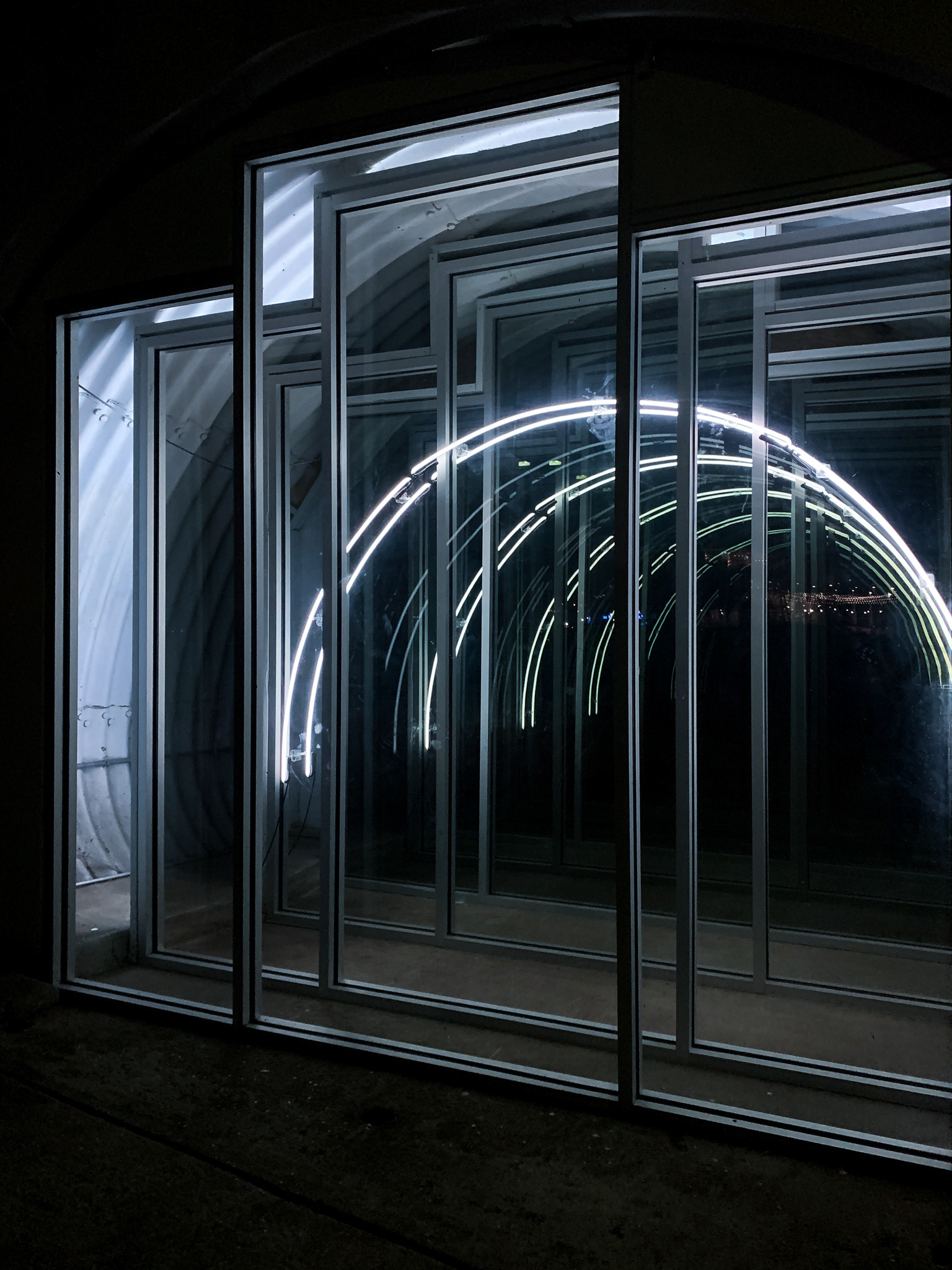 Visualizations of the audio path for the various layer of field recordings & instrumental/vocal layers in the piece "Portal to a Better Dimension" through the quadraphonic speaker system at Pier Park.
Visualization provided by Tower 21​​​​​​​
ARTIST STATEMENTS
GIIIVENS
Aether’s Requiem is a point in which alternate planes of existence collide across time. This piece will serve as an active representation of  the past's premonition of the present experience.  As ashes are to ashes the energies formerly housed and created here are to themselves.
The creation of Aether's requiem (the infinity mirror)  has been a fantasy fulfilled. Creating artwork for the public on this scale is an honor and the fact that this piece will be housed in my hometown leaves me in a continual state of gratitude. Although I am still early in my career as an artist I know that I will never forget the moments that have gone into creating this piece and that I will alway look upon my time creating it fondly.  I hope that my artistic contribution will help to breathe new life into Pier Park and all who encounter the installation and I know that the impact made will only be made greater by the quadraphonic sound piece that Eli Kahn is creating to accompany the piece. By merging a physical and auditory phenomena, Eli and I will create an atmosphere that can be found only in Pier Park.
My hope is that our immersive installation will help to spark an artistic renaissance within South Bend and places beyond and lead to more creative endeavors that exemplify beauty in a world that has recently and continuously been ravaged.
"The tunnel itself will no longer be visible. But, using mirrors and thin, embedded lights, Givens will install art that gives the illusion of a bright tunnel leading to infinity."
- (Joseph Dits) The South Bend Tribune
ELI KAHN
My portion of the installation is essentially a soundtrack to GIIIVENS’ visual piece. I wanted to create something that felt like you are being transported through a portal that leads to infinite realms better than the one in which we reside, free of hate, racism, pain, & sickness. I spent a lot of time this past year contemplating what it means to “be” in our world as it is now & this piece is meant to represent a relinquishing of attachment to our thinking about our current world as we hopefully move towards a better one.
I am working with Tower 21 (Eric Friedlander) in Los Angeles to create an immersive mix where the music is actually played quadrophonically (instead of in stereo) through a 4 speaker playback system where elements of the sounds can move around you, some parts at different speeds & some parts in different directions.
I am so thrilled to be a part of this project & elated that the city reached out to us to be involved. I have been a huge fan of GIIIVENS’ work since they were still an undergrad at St. Mary’s & getting to collaborate with them has been amazing. While this isn’t our first collaboration together (we initially worked together on several performance pieces at the South Bend Museum of Art for their annual Artists’ Mixer), this has been the first time that we are making something that is up for more than the duration of an event, so to have something permanently installed in a park in South Bend is true dream come true.
"A soundscape of music and natural sounds, crafted by local musician Eli Kahn, will come from four speakers. Guitar, strings, and vocals will blend with environmental sounds, plus recordings of engines from the era of water power that once functioned here at the dam."
- (Joseph Dits) The South Bend Tribune
For more information visit South Bend Venues Parks & Arts
↑Back to Top